Movies Released in 2013 (in alphabetical order)

With 12 Years a Slave already touted as 2013's Best Picture Oscar frontrunner just days after its premieres at Telluride and Toronto, such dazzling hype may be unfair to something better discovered quietly. For it is a very good film, excellently performed and more or less faithful to the memoirs of Solomon Northup, a free black man in New York… read more!

This year's go-to documentary crowdpleaser – tailor-made for those who enjoy "musical underdog" docs like Searching for Sugar Man and Standing in the Shadows of Motown – 20 Feet from Stardom takes a reverent look at the talented black women who sang backup vocals on hit songs, from the early '60s through modern times. There are revelations: behold Merry Clayton's… read more!

Watching All Is Lost is a bit like reading an Ernest Hemingway or Jack London short story. In this literal one-man show, Robert Redford stars as a nameless protagonist (he's cheekily credited as "Our Man") who wakes up on his sailboat in the Indian Ocean one morning to find that a loose shipping container has severely damaged it, with seawater… read more!

American Hustle opens with a long, silent scene as Christian Bale, playing a medium-time conman named Irving Rosenfeld, gazes into a mirror while carefully arranging his toupee onto his weirdly bald head. The symbolism in the scene is obvious: Rosenfeld looks like an actor preparing to go on stage. As we soon find out, he has in fact been engaged… read more! 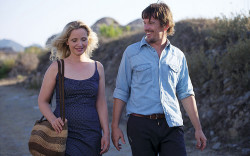 After The Artist captured the public's imagination in 2011, I wondered if it would open the door to a new wave of silent films. Well, I wondered only half-seriously, because although it was a charming movie, The Artist was also clearly designed to be a novelty. So no, it wasn't the start of an exciting retro trend, and nobody should… read more!

This three-hour drama about a lesbian relationship between young student-turned-teacher Adèle (played by Adèle Exarchopoulos) and slightly older painter Emma (Léa Seydoux) immediately begs the question: Why three hours? It's a question that, having seen the film, I am still asking. Blue Is the Warmest Color is essentially a collection of lengthy slice-of-life scenes, following the shy Adèle as she… read more!

This bitter drama is essentially Woody Allen's update on Tennessee Williams' A Streetcar Named Desire. In Blue Jasmine, Streetcar's deluded Blanche DuBois is reborn as Jeanette "Jasmine" French (Cate Blanchett), a broke and broken New Yorker who, after the imprisonment and death of her corrupt millionaire husband (Alec Baldwin), has relocated to a dull corner of San Francisco to live… read more!

This movie's so good that writing this review doesn't interest me all that much. There's nothing I can add to what Captain Phillips already successfully says. Tom Hanks comes out of moribundity to give us one of the strongest performances of his career. He is refreshingly uncuddly as the titular captain, a smart, professional, but notably ordinary man who, when… read more!

Defiantly weird indie "comedy" that's set mostly in a nondescript hotel in 1980, where various teams from tech universities around the country have brought their clunky computers and chess-playing software to face off in a heated tournament, all for a modest cash prize and quiet nerd glory. After seeing writer-director Bujalski's unremarkable but sweet slacker comedy Mutual Appreciation, I was… read more!

This dark, kinky indie became instantly famous for being shot covertly in Walt Disney World and Disneyland. Because Disney is so notorious for siccing its lawyers on anyone who mars their brand, few people expected this film to receive distribution. First-time writer/director Moore got away with a parody defense, and now Escape from Tomorrow has seen the light of day.… read more!

Greta Gerwig stars as the titular Frances, a struggling dancer in Brooklyn who, at 27, isn't ready to accept that she's too old to be chasing this particular dream, and even too old to be living hand-to-mouth like the archetypal – and obsolete – New York bohemian she is. Though primarily a character study, Frances Ha is also a breakup… read more!

I am, it appears, the last person on Earth to see Frozen. I avoided it at the start because it just seemed like another cloying Disney princess movie. And also because, despite Pixar's disappointing product post-Toy Story 3, I remain stubbornly and stupidly skeptical about any CG animated films that don't come out of the Pixar factory. (This needs to… read more!

This dramatization of the final day in the life of Oscar Grant III, a young black man who was accidentally shot by a transit cop at the titular BART station in Oakland in the early hours of New Year's Day, 2009, certainly has good intentions. Writer/director Coogler, who hails from nearby Richmond, sought to help audiences see Grant as a… read more!

Wong Kar Wai makes a kung fu movie. What more do you need to know, really? Dramatizing the life of the legendary Wing Chun master Ip Man, best known (read: only known) to Westerners as the man who taught Bruce Lee, The Grandmaster scurries through the biographical details and focuses on balletic fight scenes between Ip (played by Wong regular… read more!

During the "golden age" of 3D in the 1950s, the majority of films that employed this gimmick were genre pictures. Aside from a couple of standouts like House of Wax and Creature from the Black Lagoon, most were silly B-movies. But for a year or two, Hollywood was semi-serious about this technology: a handful of major titles, specifically Kiss Me… read more!

I read F. Scott Fitzgerald's The Great Gatsby back in college. Because it was homework, I found it boring. Then a couple of years ago, I watched the 1974 Robert Redford adaptation of the novel, because it was directed by Jack Clayton, who helmed one of my favorite films, The Innocents. I found it boring too. I don't know why… read more!

Her is the story of a lonely Los Angeles man (Joaquin Phoenix) who purchases a Siri-like operating system simply called "OS1" that is being marketed as the first true example of artificial intelligence. Once he installs OS1 and hears a perky female voice (Scarlett Johansson) chattering back at him, and making him feel interesting, funny, and desirable, he's hooked. Her takes… read more!

Catching Fire is an entertaining if ultimately frustrating middle chapter in the Hunger Games saga. Picking up a few weeks(?) after where The Hunger Games left off, Katniss Everdeen (Jennifer Lawrence) and Peeta Mellark (Josh Hutcherson) are forced to take the customary tour of dystopian Panem (a.k.a. the US in a couple hundred years) in order to superficially honor the… read more!

Inside Llewyn Davis begins with its titular character (played by Oscar Isaac), a folk singer in 1961 Greenwich Village, wrapping up a gig at a small venue. After he finishes his lovely take on a mundane old folk tune, he's told to go outside where a "friend" is waiting. This "friend" turns out to be a mysterious stranger in a… read more!