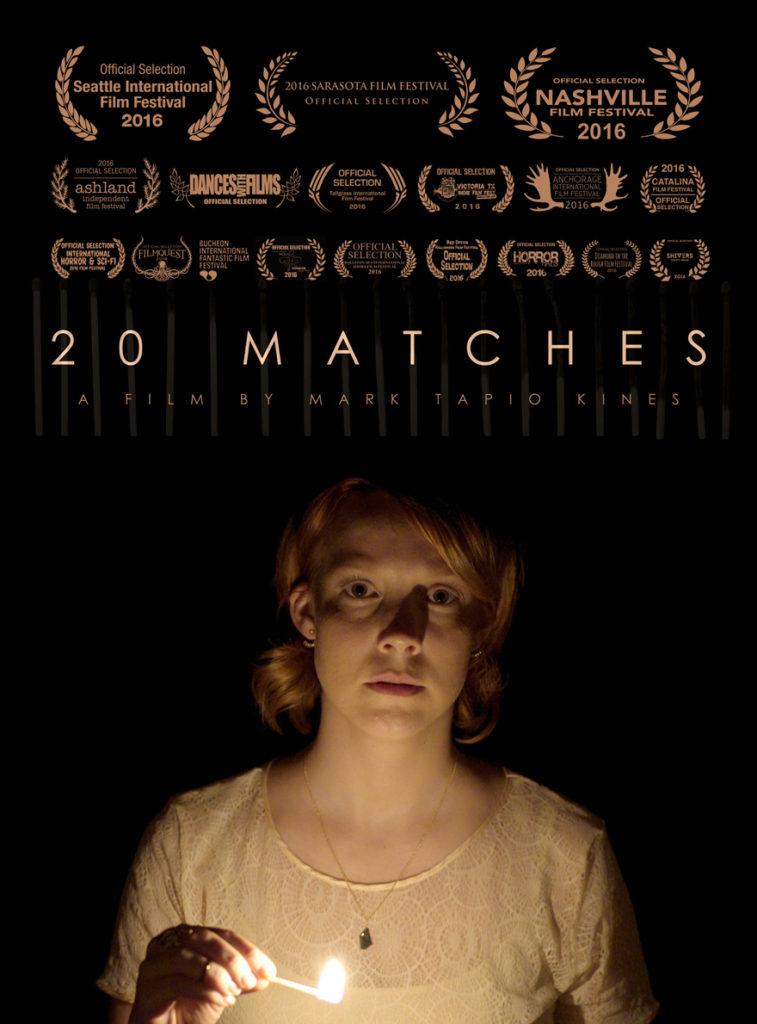 The 20 Matches poster, with festival laurels

A young woman (Nina Rausch) sits alone in a pitch black room and lights twenty matches, one at a time.

Her face illuminated only by the flame from each match, the woman tells the story of a Viennese serial killer who kidnapped and murdered twenty immigrant women – one per year.

20 Matches was conceived somewhere around 2010 as a project to make with my friend Susanne Wuest, an actress from Vienna, Austria. It sat on the shelf for several years as I waited for Susanne to find the time in her schedule to come to Los Angeles. Ultimately she was too busy (filming projects such as the art house horror film Goodnight Mommy) so in 2015, with Susanne's blessing, I decided to make 20 Matches without her.

In February 2015 I finished the script and began crowdfunding the film on Indiegogo. Over the course of the twenty(!) day campaign, I received over $6,600 in contributions, which allowed me not only to shoot the film that July and finish it in September, but also to host backer-only screenings in Los Angeles and San Francisco and enter dozens of film festivals.

NINA RAUSCH was born outside of Stuttgart, Germany. After high school, she moved to the United States and received a BFA in acting at Northern Illinois University. Nina then relocated to Los Angeles and racked up an impressive series of credits, with memorable guest-starring spots on Mad Men, Orange Is the New Black, Grey's Anatomy, NCIS, and Awkward. She has also starred in and/or produced several independent shorts.

20 Matches is an official selection of the following 20(!) festivals, in chronological order:

Along with printing out 20 Matches T-shirts and sculpting over 100 matchbox-sized clay figures for my Indiegogo contributors, I also promised to list all my backers on this website. So here they are. Give them a hand: